What is La Niña?

La Niña is a cold pool of water in the equatorial Pacific region. When the equatorial Pacific is Warm (El Niño) this region can supply a strong sub-tropical jet stream and usually a better chance of big snowstorms due to the amount of moisture. Although El Niño winters are not particularly cold, if the timing is right, we can get some whoppers! YES, 2016 was an El Niño year, and we got the last HUGE storm then.

La Niña, on the other hand, tends to make the Jet to the north push milder air into our region. We are often in the Battle Zone between colder to the north and warmer to the south when storms come along. The storms tend to turn to a mix or rain if they have any wintry weather in them at all. In general, we end up being slightly above normal with temperatures. The Pacific Northwest tends to get blasted with rain and Mountain snows. That does not do us many favors for keeping it cold in the east, as we get a ridge of High Pressure (Southeastern US warmer high pressures) pumping warmer air here.

You can see in the National Weather Service’s Winter Outlook that they are weighing heavily on the La Niña pattern. If you have been watching the weather the last week or so, you can see that this is what the pattern has looked like!

And, I have to say, we have had a horrible set of winters when there is a La Niña! I saw a meteorologist show that 60% produced below normal snow for the area.

My Thinking On La Nina:

There are a few reasons why we may see some early sneak peeks of winter in November and December, but they are unlikely to be long-lived.

The Polar Vortex is not something new and makes visits into the Lower 48 states every winter. The news media LOVES to over hype when it comes into play for the United States. Additional names to this Arctic region airmass could be the Polar Express (the streams of air that bring in the Vortex, or at least portions of it), or the circumpolar vortex.

What is it exactly?

The polar vortex is a large area of low pressure and cold air surrounding both of the Earth’s poles. (that comes straight from the NWS) In the winter it strengthens.

When it is very circular, it is considered stable and the jet stream is usually very strong. Storms likely will rip across the United States and the coldest air stays “locked” in Canada.

If you want there to be colder air masses in the United States, you will want the Polar Vortex to be weaker than normal so that storm systems can disrupt and dislodge the colder air into the United States. Another thing that can help to split and disrupt the Polar Vortex is something known as Sudden Stratospheric Warming. This is warming above the vortex that can “split” the vortex in some situations. When it splits, this also will bring colder air into the lower latitudes. This does not always mean the United States! The Warming and Splitting can take some time and air masses and weather patterns can take some time to respond.

SO WHAT!! What about our winter?

We have already seen some impacts of the disruption in October. And now, all models are showing that an elongation/disruption mid-month. The disruption could cause a link to the cold in Siberia and provide some real cold for the US. It appears that cold will settle in for a lot of the Nation by mid and late month. Will it link with some moisture? There are some hints that it *MAY* – but I would not bet on snow.. but I am going to say that the risk is not zero!

These features would take a very long time to explain, but they can work together.

“The AO is a climate pattern characterized by winds circulating counterclockwise around the Arctic at around 55°N latitude. When the AO is in its positive phase, a ring of strong winds circulating around the North Pole acts to confine colder air across polar regions. This belt of winds becomes weaker and more distorted in the negative phase of the AO, which allows an easier southward penetration of colder, arctic airmasses and increased storminess into the mid-latitudes.” – noaa.gov

It seems like the Arctic Oscillation appears that it will have some negative periods this winter due to the weaker Polar Vortex. That could mean some colder intrusions.

We want a negative NAO (if you want snow) mainly because it will block the retreat of cold air in the area and cause storms to ride up the east coast. That tends to be our snow making helper! When the NAO starts to turn positive, we end up usually doing the best.

The NAO looks like it will have some negative phases as well. We had a good negative run in October, but that changed at the end and as we have gone into the first 2 weeks of November.

“The Pacific-North America (PNA) pattern is one of the most prominent modes of low-frequency variability in the Northern Hemisphere extra tropics, appearing in all months except June and July. The spatial scale of the PNA pattern is most expansive in winter.” – NCDC

We basically want a positive phase which means a Ridge on the West Coast and a trough bringing colder conditions and the winter storm track would be good for the area. (if you like snow!) It could also connect to the cold over the Arctic and from Siberia.

I think this will depend on the way that the Ocean temperatures impact the region out west.

La Nina is the big one. The cold area of water in the Equatorial Pacific is very prevalent. The other interesting areas are the Pacific Northwest warmer air temperatures. The other area is the warmer Ocean temperatures off the East Coast. The different areas seem to offset each other.

This is a huge unknown this year. When Tonga exploded it put a ton of moisture into the atmosphere. This is something I think already impacted the Hurricane season and the southern Hemisphere winter. I do not know how it will impact, but it could help it be colder.

I think we will see an early start to colder temps in late November and I would not be surprised to see some snow late November and early December. I think we still end above normal in temperatures. Additionally, the La Nina impacts will be the biggest one. So we end up with 16 to 25 inches of snow which is just normal amounts.

Forecast
Nice and warm day with highs around 70. Saturday looks nice with highs in the low 70s. Mid-70s Sunday with some showers possible. Very warm Monday with highs possibly near 80! We turn cooler Tuesday, and then some showers possible next Thursday. This could be the beginning of the changes towards a colder end of the month. There are signs we could look at some snow close by too if things trend the right way! BUT THAT IS WAY OFF!
Enjoy the nice weather!
YES – My winter outlook is overdue! I will get it out by Monday! It is just an educated guess! LOL! 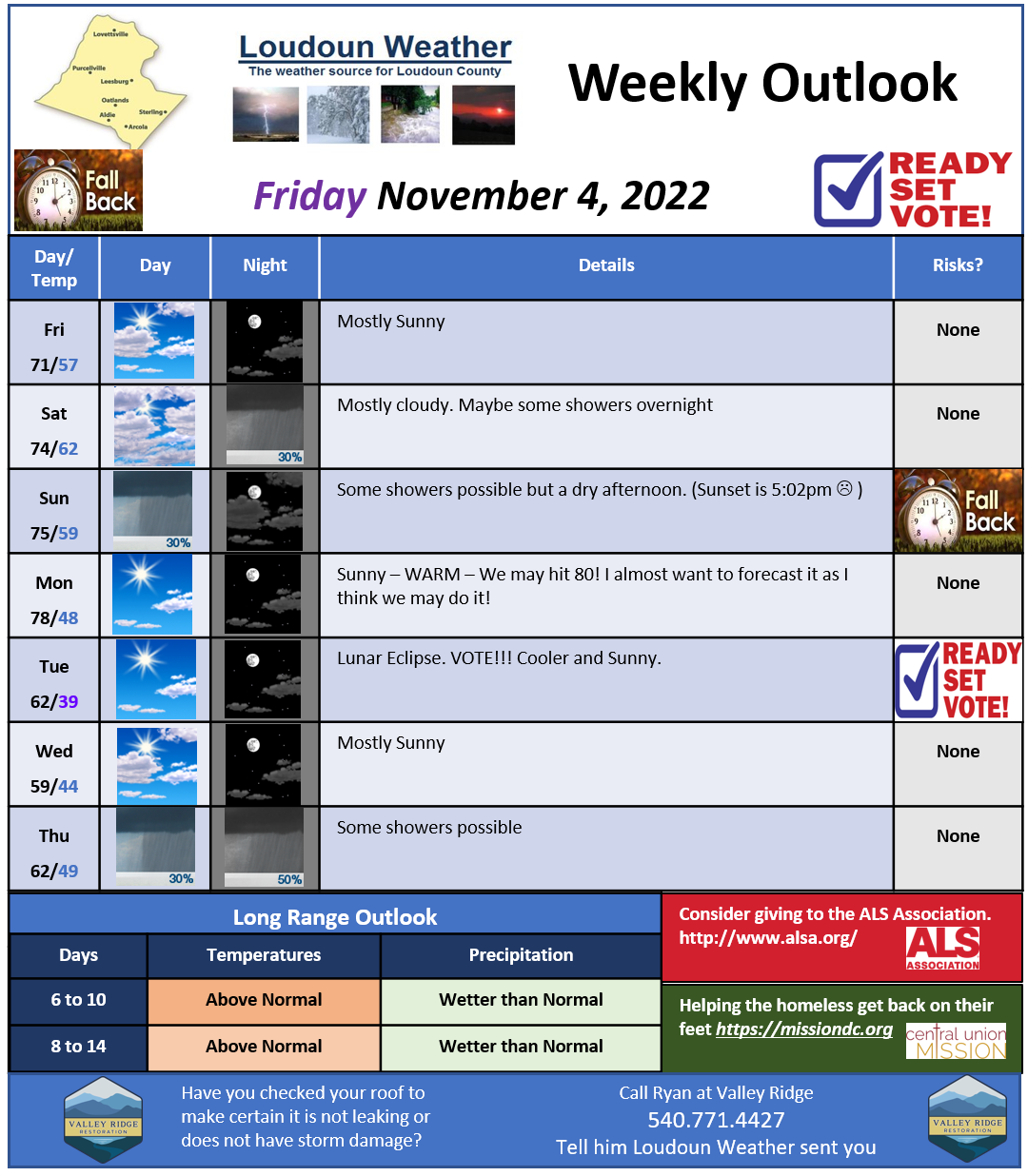 Uncategorized
Happy Halloween! We will see more showers today than I had hoped. Unfortunately, the most showers look to happen this evening. I do not think it is a washout, but it will be damp. The rest of the week looks dry and very mild.
The long range still looks warmer than normal but there are signs of patterns changing especially towards mid-month.
Winter outlook will be coming out in pieces this week! 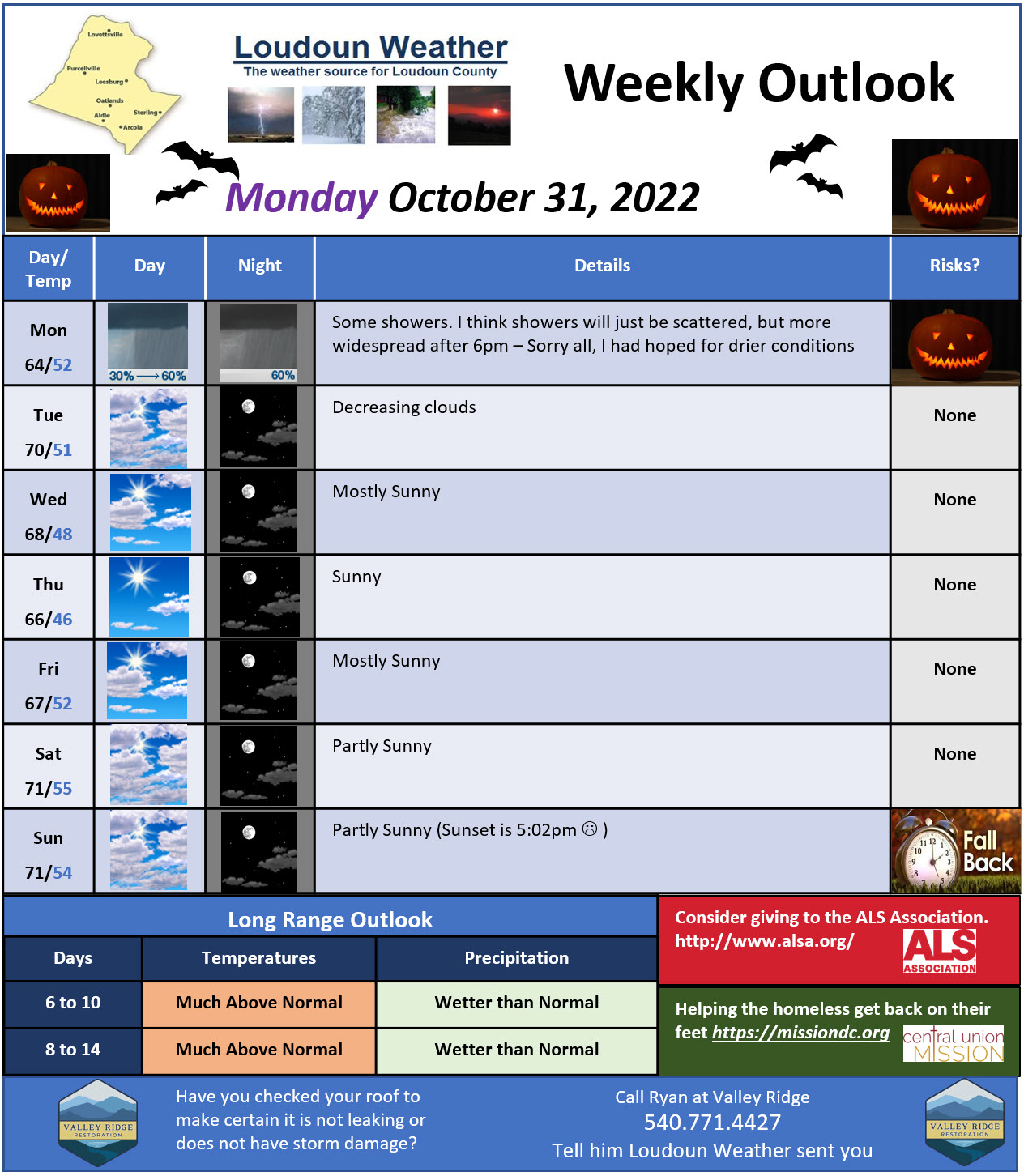 Uncategorized
Some rain today, nice tomorrow, cloudy and kind of cool Friday through Saturday…
🎃HALLOWEEN🎃 – We may see some rain! I am not certain on timing, but it looks likely that at least part of the day will be wet ??
The long-range continues above normal for temperatures, with some wetness possible followed by drying! 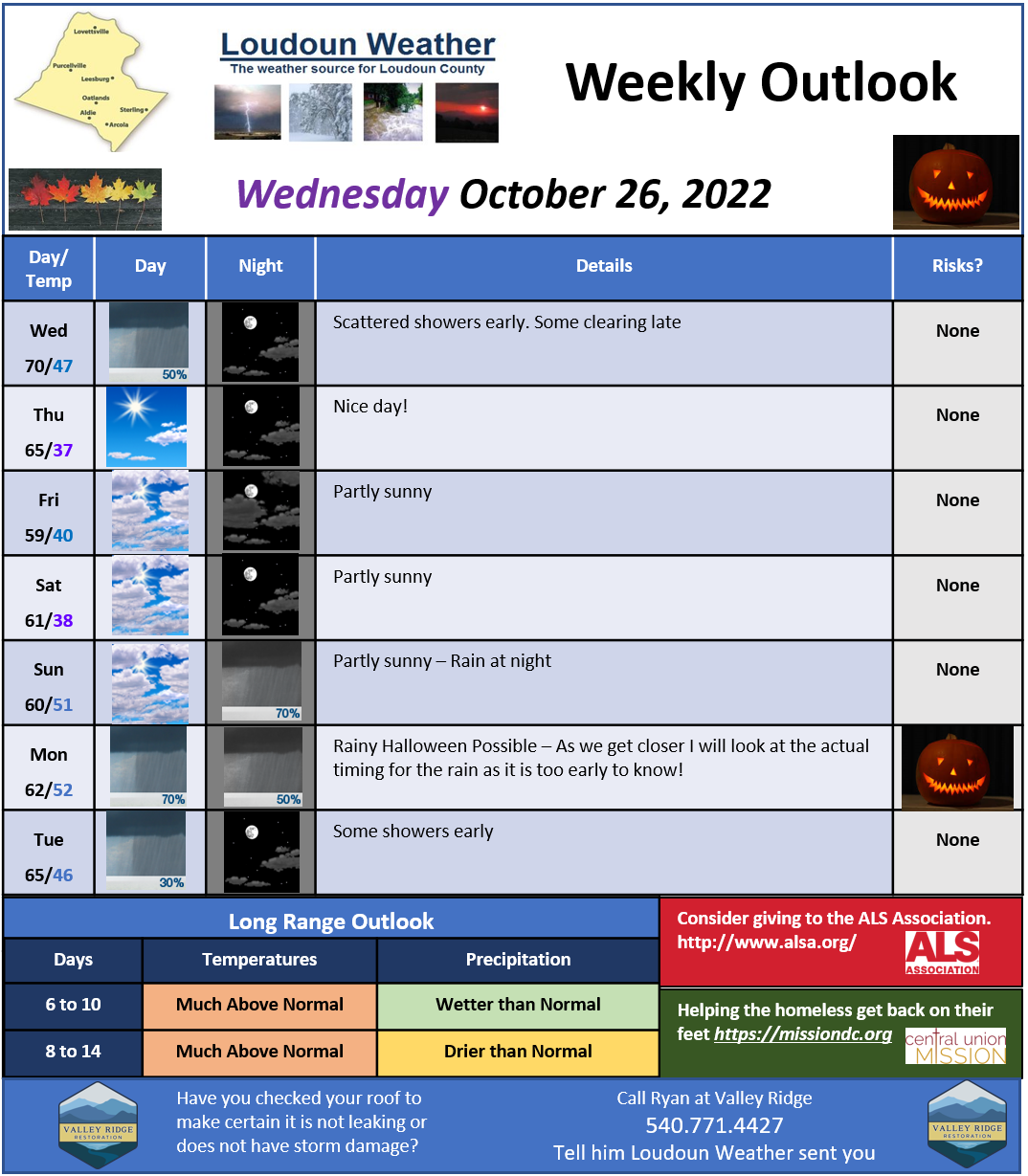 Uncategorized
That easterly wind off the ocean will keep things humid and cloudy through Wednesday. It also could mean some very light drizzle and fog overnight. Some showers possible Wednesday and that will turn us sunny again. We will have another potential for some rain showers next Sunday, but we have time before that comes to fruition.
Otherwise, temps will stay above normal for the foreseeable future.
SUPER LONG SPECULATION, the second week of November may bring back a shot of colder temps… could there be some moisture around too? I do not know.. if it does come this will be the first windy cold coming in! That could test your roof, so, if you have not had it checked, please take some time and call Ryan from Valley Ridge! See his info at the bottom of the outlook!
Have an awesome week!
Uncategorized

Listen To the Daily Outlook on Achor.fm