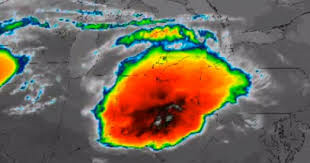 It has been eight years since the June 29, 2012, Derecho. I remember it well for many of the same reasons many have commented on the Facebook post about this pretty spectacular event.  Being a weather nerd, I had been watching the Derecho on and off that day. It was a Sunday afternoon, and my company had just launched a new support website that I was modifying and updating. Earlier in the evening, I had to go to Best Buy to purchase a new dryer as ours just was too old. Little did I know that the dryer would stay in the minivan for 3 days due to the aftermath of the storm.

What is a Derecho?

According to Dictionary.com, a Derecho is “a widespread and severe windstorm that moves rapidly along a fairly straight path and is associated with bands of rapidly moving thunderstorms.”

In Meteorological terms, it must meet certain criteria to be labeled a Derecho. From the Storm Prediction Center, there is a great page for full details. Specifically, they define it by “.. the swath of wind damage extends for more than 250 miles (about 400 kilometers), includes wind gusts of at least 58 mph (93 km/h) along most of its length, and also includes several, well-separated 75 mph (121 km/h) or greater gusts, then the event may be classified as a derecho.” The June 29th system definitely met these criteria. The Wikipedia page outlined the storm passing multiple states and causing upwards of 3 billion dollars in damage. Further detailed information for a Derecho can be found in the assessment from the National Weather Service.

Why was it so bad for Loudoun?

It does not take too much effort for people to remember the weather that day, and especially the days following the Derecho. Very Hot and Humid! The Derecho did not displace that heat at all, and many suffered from days of heat with no electricity.

“I was lucky- our power came back on in 24 hours, and I had just filled the livestock trough.

I had friends that had to try and haul water for their livestock for a week in the sweltering summer heat from in town. It was awful.” – Callie Fulmer

“First night wasn’t bad, but it quickly got hot. We ended up moving our mattresses downstairs to sleep because upstairs was unbearable.” – Gwen Wotring

“No power for 5 days and the heat was sweltering.”  – Ginger Kave

I remember the heat as well! It was super hot and humid. We had a lot of humidity, and the heat was still very prevalent when the storm complex came over the mountains late that evening. This was “fuel” for an already powerful system, so it actually strengthened as it came over the mountains, which is not that common, especially after the daytime heating has stopped. The electricity was quickly knocked out from winds that gusted as high as 80 miles per hour in the region!

As highlighted in the Wikipedia Post, winds that high toppled trees and caused over 1 million power outages in the state of Virginia. It took several days to restore power and was one of the worst power outages that the state had ever had, only outdone by Hurricane Isabel and Irene, according to Virginia Power.

Some Loudoun Weather Facebook accounts of the event included:

“We drove home to Sterling from vacation in Jamestown through the Derecho. Was scary! Trees down in the roadway and barely visible highway…”  – Gwen Wotring

Chris Odell captured the feeling of a lot of people that had some serious damage. “ Working for a tree company the devastation of fallen trees. Downed trees everywhere. Working for 3 days straight with no bathrooms no gas stations very few places to eat (had some gas cans with old gas to get by). We were busy for months after. Crying homeowners for various reasons, good and bad.”

Derechos tend to form along the top of a High-Pressure ridge. There are two different kinds of Derechos, but the ones that impact our region are known as Progressive. That day we were on the northern edge of that heat dome of high pressure, and cooler air was to the north. The point where the two met had a strong jet stream, which was the air current that pushed the storm complex along. At the beginning of June, we were close to this setup, so I was concerned about a Derecho. Sure enough, a Derecho did hit Pennsylvania and New Jersey. Interestingly enough, the front that came through the last few days (June 27th and 28th 2020) has a small chance of setting up a Derecho like pattern for far Southwestern VA, parts of Tennessee and into North Carolina. That may just end up being a storm complex as the exact set up is not quite the same.

So how often could we expect a Derecho? Every Two to Four Years, according to Derecho climatology.

I mentioned that I was responsible for a new support Website that came online. I modified the site minutes before losing power and took the site down by accident. With no power, I was stuck with a website down that had multi-millions of users that could be using it! I drove around town looking for Wi-Fi, but could not find anyone with power. I connected to my phone and made the switch back on the website in a school parking lot that had enough signal for WIFI.

“I took Church to Cascades Parkway. As I was driving past Costco on Cascades Parkway, all of the lights went out – street lights, stores, traffic lights. As I was crossing over 7, the winds started – and I thought my car was going to flip. The wind and rain became so severe, and in the dark – I couldn’t see where I was going. I finally found a car to follow, and we slowly made our way to Palisades Parkway and then Potomac View. Then the other car turned off, and I couldn’t see the road. I was terrified. I pulled off and into someone’s driveway. The house was dark. If I would have seen a light or person, I would have asked if I could go in. I was that scared. I called my husband but then we lost connection. I was looking at radar and it looked like the worst was yet to come. So I decided I couldn’t sit in that driveway waiting for a tornado or whatever was coming my way. So I drove slowly home into Lowes Island. There were trees down across Algonkian and Lowes Island. Thankfully, the way the trees fell – I was able to drive over the tops and around them. A couple of mailboxes flew by me. Street signs, debris, trees, etc – all flying around the streets as I was driving. When I got home, I couldn’t pull in the garage because the power was out so I had to run through the storm into the house – to then hear water pouring in through our front window! I have never been more scared of weather or driving as I was that night.”

It was definitely a scary night. The pattern does not look like we will deal with any Derecho this week. I am also very careful when I see the potential, to avoid the name as it can spark so much fear in people.

Let me know if you liked this and would like other write ups about weather events that have impacted Loudoun! Thank you all for your stories!

Wikipedia write up on the June 29th Derecho – https://en.wikipedia.org/wiki/June_2012_North_American_derecho